Have you ever wondered who else in your company has your project open while you are working on it? Oracle Primavera P6 Professional has a built-in feature that allows people to tell what projects are currently opened by others in their company.

How to View the Project Users Dialog Box

To access this feature, simply go to the Menu bar at the top of the Primavera P6 Professional screen and select File then Open. This opens the Open Project Dialog box. You have the option to select a specific project or any of the Enterprise Project Structure (EPS) node bands. When you select an EPS band, it will report on all the projects that fall under that node. Lastly, click the Users button.

In the example image below, the top EPS node is selected which will view any User who has a project open in the entire database of projects. 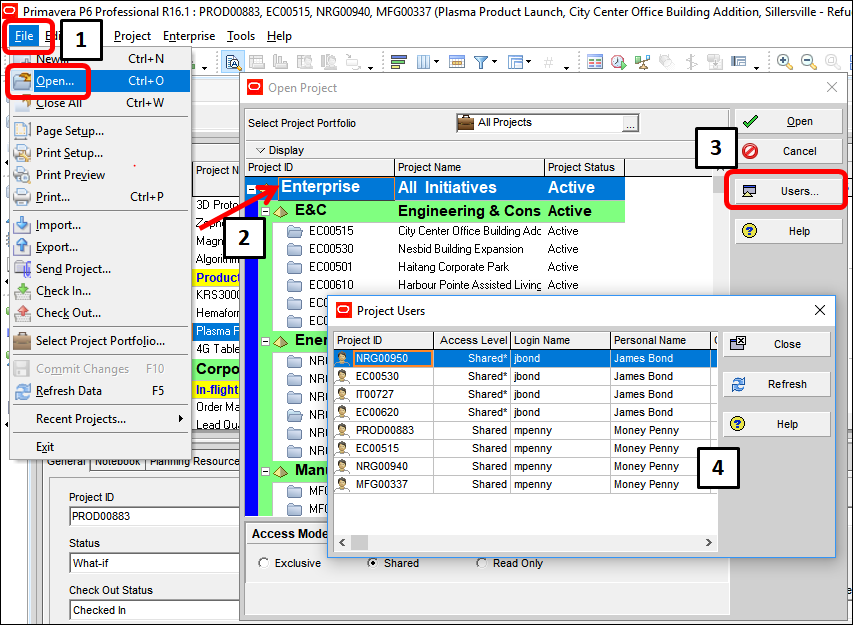 Unfortunately, in older versions of Primavera this feature did not work consistently. Often, whenever someone tried to access this feature it would cause a “CF-0649-F Catastrophic Error” or some kind of “Application Event Code Error”. As a result, the program would unexpectedly close and Users would have to restart Primavera P6 Professional.

In 2017, I had an opportunity to work with a company that was upgrading from Primavera P6 Version 7 to Release 16.1. I managed a Service Request Ticket for Oracle Support to fix the Catastrophic Error bug. Oracle Support then resolved and fixed the bug in Primavera P6 Versions 16.2.10.0 and 17.10 Patch Set. After extensive testing, I was not able to reproduce the bug once the company had patched their P6 version. Oracle mentions the fix is also included in any subsequent newer versions of Primavera.

Primavera P6 Professional has a useful built-in feature that allows P6 Users to identify and view who has projects opened. Unfortunately, in older versions of Primavera this feature did not always work. If you are experiencing an error when trying the Users feature, then I suggest upgrading P6 to a newer version. If you are not sure which version of P6 you are using, you can easily check by going to the Menu bar, select Help, then About. The version or release number will be listed in the About screen.

This article has detailed instructions on how to buy a license directly from the online Oracle Shop.